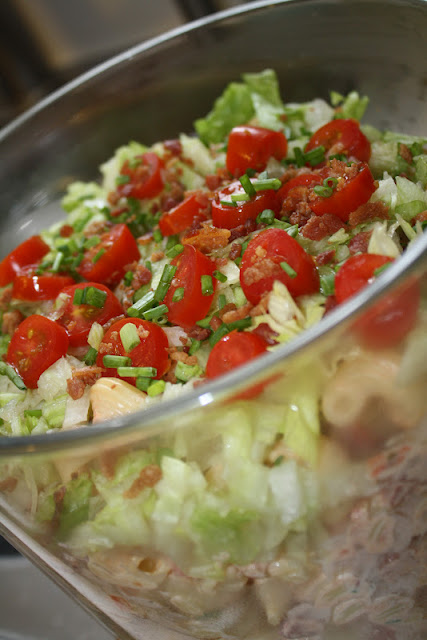 When I mentioned this the other day I got quite a few emails, FB messages and comments that this was the recipe ya'll were excited about. It is indeed delicious, the Chosen One, not a huge pasta salad fan declared it the best pasta salad he has ever had...ever. Hope it's as well loved on your table.

Ingredients
Directions
Cook pasta according to box directions until al dente, be sure to salt the water.

Drain and toss with the milk in a large bowl; set aside.

While pasta is cooking fry the bacon until crisp. You are going to need the bacon grease and frying pan. Drain on paper towels. Leave 4 T bacon grease in the frying pan.
Add the tomatoes and garlic to the pan and toss until warmed through; season with salt and pepper.

Chop the bacon into bite-size pieces. Drain the pasta well then toss it with all but 2 T of the bacon and the tomatoes. Mix the mayonnaise, sour cream and 5 T of the chives, salt and pepper in a separate bowl.

Mix the dressing with the pasta until thoroughly covered. 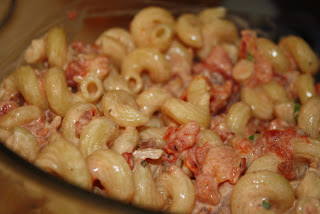 Refrigerate. Right before serving top with the chopped lettuce. Garnish with the remaining bacon bits, some diced tomatoes and the last tablespoon of chives. 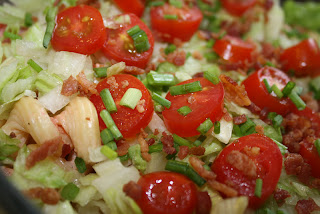 * corkscrew pasta works perfectly, I've read some other versions using different shapes that didn't get rave reviews
**I'm not sure why this was in the original recipe but I did it, maybe to help the pasta not stick while set aside. If I hadn't decided to drain it the finished salad would have been much too runny.

If you try it let me know what kind of reviews you get :)