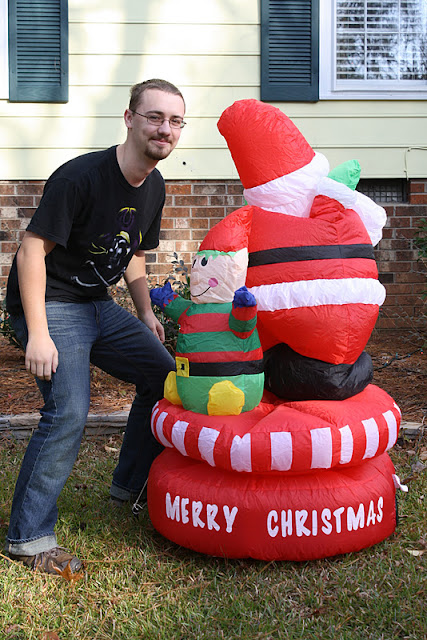 I cannot begin to tell you how happy the Pirate is with this huge surprise gift from us. He has talked about filling the yard with inflatables for years (not gonna happen). He tried to convince me on the 23rd that I reallllly needed to get the Chosen One on for his birthday (on the 24th) so he could practice his awesome grandpa act so he'll be ready for future grandbabies @@ He would have never ever believed that I would consent to one of this being under the tree...or in the yard. His happiness definitely made it worth it but when he mentioned that it was the start of a collection I had to quickly pull the reins on this horse. 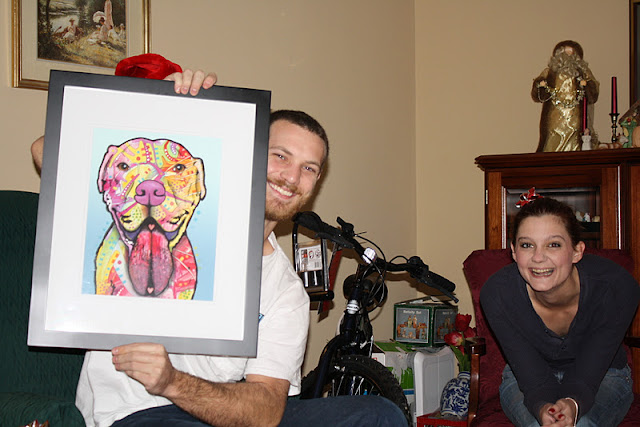 This was the gift I was most excited about us giving the Beast and SweetGirl. It's by Dean Russo, a NYC artist I found on etsy. It looks very much like their dog, Darby. So happy they love it! 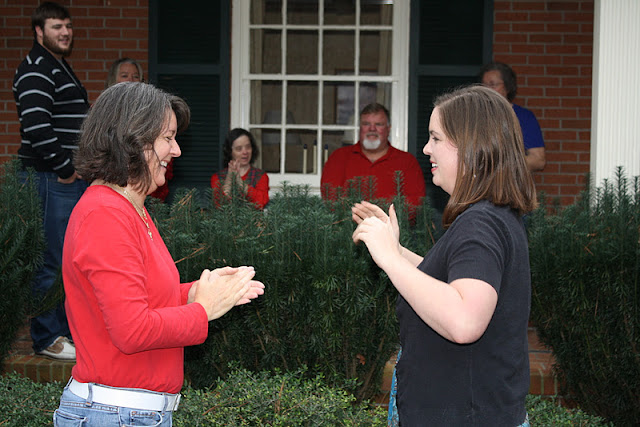 I love the silliness of my Baby Sister and the Niece but most of all I love that my sister, the Special One is smiling in the background and clapping along with them. She didn't have many smiles Sunday so I really treasure that I caught this one. Pat is almost 58 and has Down Syndrome, she is developing Alzheimer's and some days are just harder than others for her and those of us that love her. 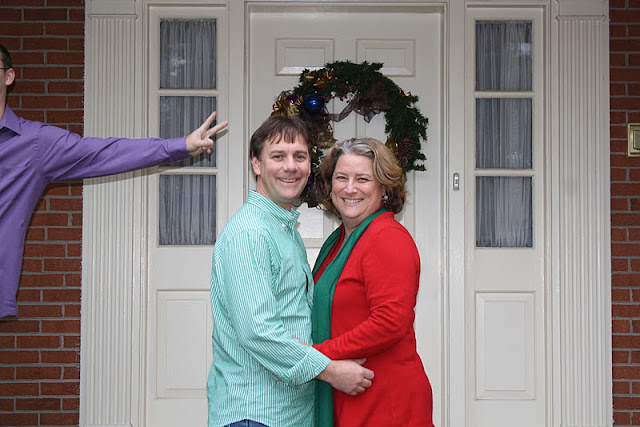 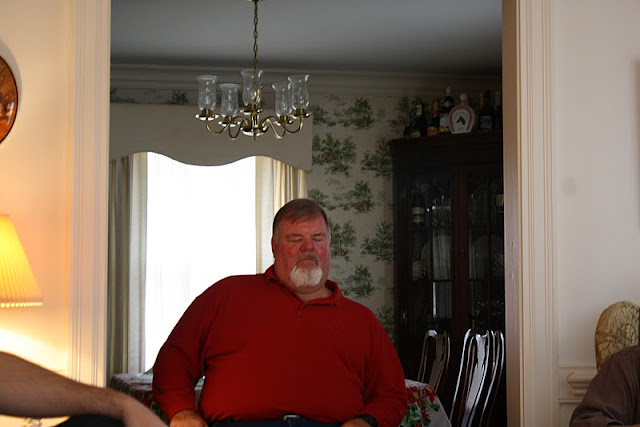 Bunn Boy (my bil) decided to take a little nap even if we were just on the first person opening presents. We started with the oldest this year which is my 81 yo Daddy. Have to admit Daddy was taking his sweet time, it didn't help that he got a Kindle and had no clue what it was. I later gave him a lesson and think once he's used to it he'll enjoy it, he reads a great deal (and retains every word!). 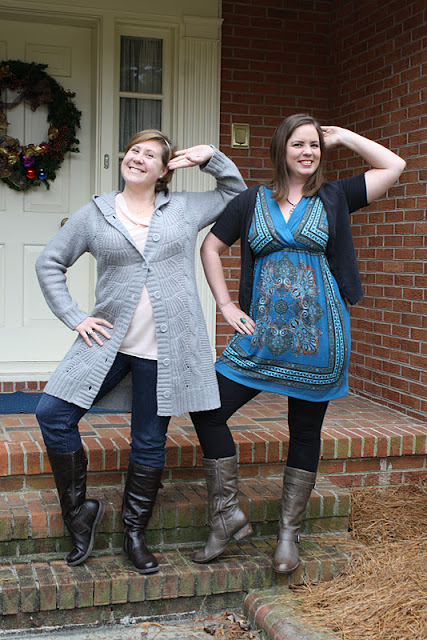 The Niece and Niece in law posing. This is a pose my niece used a great deal when she was little, probably from posing for dance recital pictures. She seemingly has become quite fond of it again. Aren't they lovely? 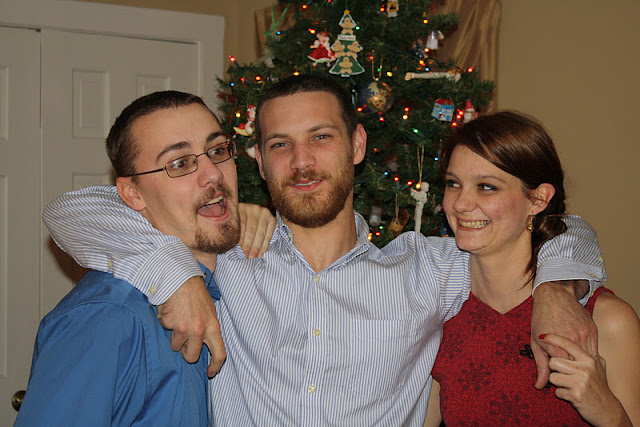 Usually it's the Beast that is playing around and making us have to take pictures over, this year the Pirate took over. 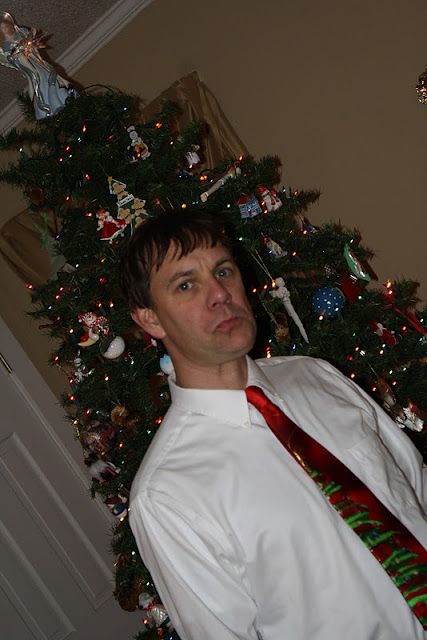 I have no idea lol 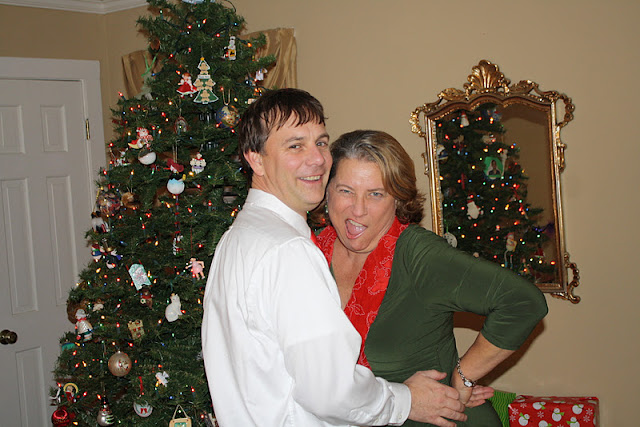 The final pose of our shoot, I behaved (for the most part) up until this point. 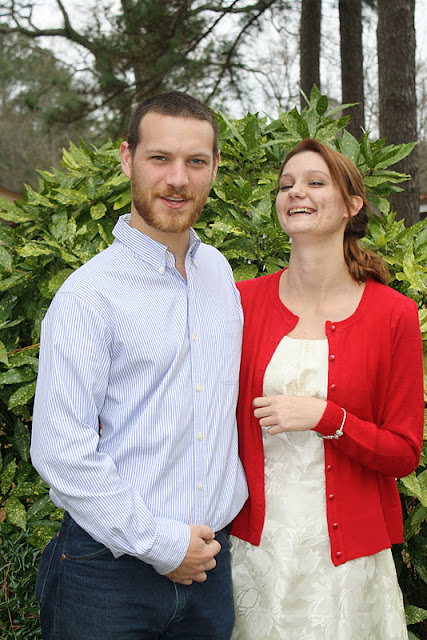 The Beast is covering his belt buckle, think it was a skull head, not my choice for the Christmas photo.
I hope your Christmas was filled with lots of smiles and a bit of silliness. All of my immediate family was together for the day and  I never take that for granted, it was a glorious blessing on the most blessed day.
We're not ready to stop, tomorrow The Chosen One's mom comes to stay with us for a few days and we're headed to the Genghis Khan exhibit! What are you up to this week?
Posted by Beverly at 11:44 PM