Well, Beverly what exactly IS a scuppernong? 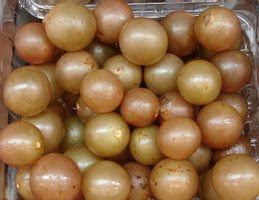 One of the most vivid olfactory memory triggers for me is scuppernong grapes. My grandparents had scuppernongs growing on a huge arbor in the chicken yard when I was growing up...actually it was still there when my husband, first child and I lived on the farm with my grandmother the last 14 months of her life. I can eat a scuppernong or take a sip of scuppernong wine (the non alcoholic has the greatest affect) and I am standing under the arbor with my granddaddy and little sister eating those delicious grapes. I love that when Christopher was small I was able to create those same memories with him...the two of us with Grandma Shack and our dog, Alex under the vines pulling down grapes. So for my UK friends and other uninitiated scuppernong readers here's info about my beloved grape :)

North Carolina is home to America’s first cultivated grape. Florentine navigator Giovanni de Verrazzano found it growing in our Cape Fear River Valley in 1524.Early NC settlers called scuppernongs - a variety of the muscadine - “The Big White Grape.” They began making wine from it in the 1700s.


A scuppernong is a large type of muscadine, a type of grape native to the present-day southeastern United States. It usually has a greenish or bronze color, and is similar in appearance and texture to a white grape, but rounder and about 50% larger.


Its name comes from its original place of production, Scuppernong, North Carolina, where it was first grown during the 17th century, a name itself tracing back to the Algonquian word ascopo for the sweet bay tree.


Several small green seeds are found in each grape. The skin is very thick and tart. The pulp is viscous and sweet. The seeds, which are bitter, can be swallowed with the pulp or extracted and spit out. The most desired part of the scuppernong is the extra sweet juice that lies underneath its skin.There is a proper and time-honored method for eating a scuppernong, the object of which is to combine its various components into a single burst of flavor. Hold the grape gently yet firmly within your thumb, index and middle fingers, with the stem scar oriented towards you. Pucker your lips around the stem scar and squeeze the grape gently while sucking the pulp and juice into your mouth, straining out the seeds through a narrow slit between your top and bottom teeth. Use a finger to flatten the grape skin against your front teeth to extract the subcutaneous flavor concentrate, while guiding the seeds away from the opening to the bottom of the grape skin. The seeds should be left inside the empty skin, to be neatly discarded. The whole process takes about a second and quickly becomes second nature.


Scuppernongs figure prominently in the story "The Goophered Grapevine" (1887) by Charles W. Chesnutt, and are also mentioned in the book "To Kill a Mockingbird" by Harper Lee. The scuppernong also figures prominently in William Faulkner's novel "Absalom, Absalom!" as the plant under which Coronel Thomas Sutpen and Washington Jones sit down to drink.