The Chosen One is not a cook and has never claimed to be. Well, the first month we dated he did use cooking to woo me and I was indeed impressed. He and his roommate invited my roommate and me over for dinner. Guys in their early twenties are not thought of for their cooking skills. Susan and I were pretty pumped because with guys cooking we thought we'd be getting steaks on the grill and our budgets didn't allow for steaks. With appetites ready we arrived to a dinner of home cooked fried chicken! Fried chicken?? Yep, fried chicken and it was cooked to the bone and quite delicious. This man must have mad cooking skills, I thought.  Next up to testify to his cooking prowess...chicken cacciatore (which I'm not sure I had ever heard of and know I had never eaten) and it too was yummy.  The Chosen One and I met in September, had our first date in October, got engaged in March and married in June so there weren't necessarily that many times he had the opportunity to cook for me. But I eventually learned the cooking was really, truly just to impress me, this was not a man with a heart for cooking. But he very much has a heart for me, I have been sick for the last 5 days and he has cooked. It is a Southern (US) tradition to eat collards and black eyed peas on New Year's Day. On New Year's Eve I told him either he or his future daughter in law would have to be the collard cookers this year. And you know what, he didn't even call and ask her to do it! I had also told him he could get them canned and which brand to buy if he chose that route and the man came home with 2 bunches of fresh collards!  He did a good job of preparing them, they were a bit salty but that was my fault, my taste buds are dead (which I didn't realize at that point) so I added a good dose of salt. The meal wasn't quite like if I had been cooking but it definitely was cooked with as much love. 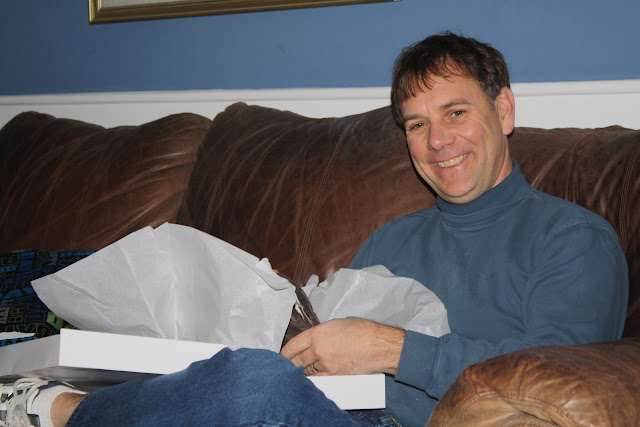 the Chosen One on his 50th birthday, Christmas Eve